Window condensation is a surface condensation of water vapours, by which indoor air in a room is saturated on cold interior surfaces. Condensation of water vapour on a scuntion and glass may result in very unpleasant hygienic problems. Modern windows are too close and they don’t provide a desired exchange of indoor air by natural infiltration. Due to the lack of air exchange, interior environment is too humid. Window is a structure which does not absorb water – increased humidity causes condensation on it. The paradox is that in most cases, condensation shows the quality of the window (i.e. the window seals well). On the contrary, some manufacturers supply poor quality windows which don’t condense. They don’t seal and it results in continuous ventilation of rooms.

Air can at certain temperature absorb only some limited amount of water –warm air more, cold air less. Air above this level isn’t able to absorb more water, which causes that this water precipitate in the coldest areas. We see this every morning in our bathrooms when we take shower – cold tiles cool down the hot air from the shower and it is no longer able to keep excess water vapour. The tiles condense and we see water drops running down. 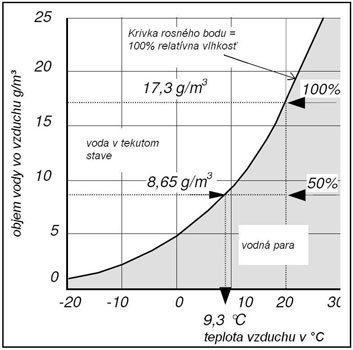 In winter season, outdoor air is relatively more saturated with water vapour, but because of its lower temperature, it contains much smaller absolute amount of water vapour than warm room air, which tends to have lower saturation (there is a subjective opinion of windows users, which is incorrect that intensive ventilation lets humid outdoor air into the room and warm dry air out – in fact, intensive ventilation reduces indoor humidity!). The lower the air exchange in the room the higher the relative humidity of indoor air, especially in winter season! The smaller the room is the higher the relative humidity of air, which explains more frequent incidence of hygienic problems (mold) in smaller flats in comparison to bigger flats. The hygienic problem upraises rather in a smaller children’s room than in a larger living room. There usually sleep two people in the bedroom, who breathe out more water vapours than one person, for example in the student’s room. In the edge areas of glazing then, due to higher thermal conductivity of the distance profile, increase of heat flux and decrease of indoor surface temperature occurs in comparison to the other glazing area. When this temperature declines below the dew point temperature, there is condensation of water vapour. One of the reasons of these problems might be the high value of the coefficient of heat passage of insulating double glazing Ug> 1.8 W / (m2.K) [our company NOVES normally uses glasses with Ug = 1.1 W/(m2.K)]. 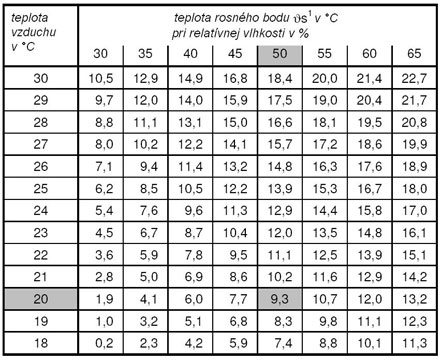 Cooling of interior scuntion surfaces and window frames can be avoided by insulating of exterior scuntion with at least 30 mm of thermal insulation after new windows are installed and by vapour-tight insulating of interior joint between the window and scuntion with special tapes or foils. If a whole peripheral wall of an older house has a very low thermal-insulating power (fully burnt brick, cinder blocks, etc.), it is necessary to think about the insulation of the whole facade. Otherwise, water vapour would precipitate on cold scuntions, humidity would soak into walls and the damp wall becomes an ideal place for mold. Mounting of interior blinds also contribute to condensation, which restrict air flow along the glass. The use of interior blinds, an incorrect placement of curtains and an intermittent way of heating may stress this disorder, as well as impervious laminate flooring and wall coating with paints enhanced with latex. Often we see that there are evaporators on the heaters under the windows, flowers on the internal parapets or rooms adjusted by wet processes (coating, repairs, etc.).

From our daily experience, we can conclude that explaining and cause identifying of excessive window condensation with customers is a very delicate issue. It is believed that ventilation uselessly lets air out while the price for thermal energy is constantly increasing. The truth is that opening of the ventilating aperture, i.e. opening of the window sash into the folded position is the worst way of ventilation in winter season. Air exchange is slow and the window must be open for quite a long time. Heat from the room escapes much longer than by intensive ventilation, the walls of the room cool down and fresh air in the room heats only slowly. Much more effective and economical is intensive ventilation by opening of window sash wide for 5-10 minutes. It needs to be done several times a day, especially before bedtime. Fresh drier air enters the room within a few minutes (5-10), it is heated quickly from the walls which are accumulated with heat and they haven’t cooled down, because ventilation lasted only a short time. Usually, fresh air is heated after 5-10minutes after closing the window. The flat user thus gains air rich in oxygen and makes the first and most important step to eliminate window condensation. In the majority of cases, when users of high-quality windows had pointed to ‘poor quality’ of the windows due to excessive condensation, the mode of ventilation had been changed (perfect ventilation before the bedtime) and the problem disappeared. The appropriate solution for the required air exchange can be achieved through special ventilation systems (flaps, ventilators, grilles). The solution is often offered also by the window fittings manufacturer. One of the options of the whole perimeter variable system of window fitting type Winkhaus autoPILOT for open – folding windows is an additional equipment of this fitting, known under several established names, e.g. ventilation, micro-ventilation, slit ventilation or so-called the fourth position of the handle. This type of fitting is a normal part on all open – folding windows in the company NOVES, unless required differently. Higher possibility of ventilation compared to ultimate folded position, by price and function, is multi-position ventilation. Fitting components for this type of ventilation are always placed depending on the size of the window and options, either on the vertical part of the window sash on the rail or on the upper horizontal part of the sash fitting. Air flaps are inbuilt either above the windows into the expansion profile or as a separate unit to the frame, to the frame, into the insulating glass or between the frame and the sash. Ventilation systems, as a separate unit to the frame or in the expansion profiles, have a spatial advantage and thus pollen filters can go in them. Their disadvantage is their size and visibility which worsens the aesthetic side of the window, causes higher demandingness and it is impossible to mount them or remove them additionally. If such ventilation systems do not allow access to their entrails, it is impossible to clean air intake paths and the dirt and bacteria might subside. The same is true for ventilation systems in the insulating glass. Ventilation systems between the frame and the sash are smaller in size, so it hasn’t been possible to mount there pollen filters yet. Their advantage is that they can be mounted additionally or removed anytime. They work on a mechanical principle and so they have nothing to go wrong in them. They are able to ventilate from 5 to 9m3/hour/window area and the paths can be cleaned very easily. Since the systems are integrated between the frame and the sash, they can be cleaned anytime when the window is open. The fact that these systems are integrated in the window, they don’t affect their appearance and don’t interfere – indirectly supporting elegance of the selected windows. For systems with stop or central sealing, there exists system aluplast Regel Air ®, which is mounted into the upper part between the frame and the sash, it doesn’t worsen the thermal insulating features of the windows and it is suitable for acoustic insulating the class IV to 42 dB. New among these systems is aluplast BasicAir plus ®, which is also mounted into the upper part of the windows between the frame and the sash but it is only used for the systems with central sealing. It doesn’t worsen the thermal insulating features of windows, it works from the pressure difference 4Pa achieving acoustic insulating parameters of the class IV to 42 dB and since no manipulation with the window structure is needed, it retains its high security, supports its elegance and it has integrated protection against ingress of insect into the interior. Ventilation systems help prevent the occurrence of mold. Investment in them is 10 – 20 times lower than the potential costs associated with the redevelopment of the premises and the risk to health of its inhabitants. Ventilation should never be underestimated, because by its omission we can cause permanent damage. 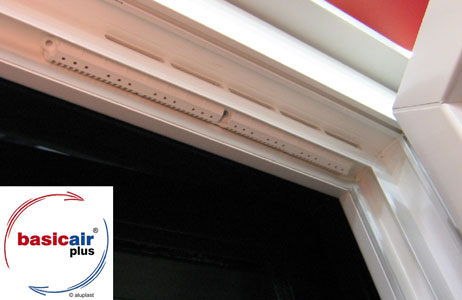